Your Team Can Thrive Amongst Chaos. Here’s How. 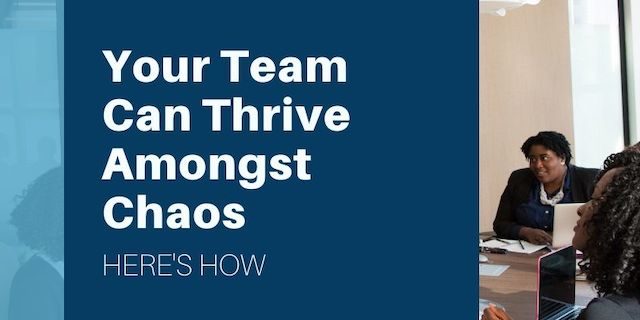 Chaos is one of those words that none of us really like to use when talking about teams. For many of us, seeing chaos within a team is a sign that it’s failing. When we visualize high performing teams, we often imagine one where organization and predictability dominate…like a well-oiled machine.

But back in the real world, a question worth asking is whether this picture that we have of the ideal team is realistic, or even possible in this era. Think back to the last major challenging period that your team faced together – were you really able to escape the reality of chaos?

While teams differ in their ability to handle chaos, all teams share one thing in common – we all face times of chaos, messiness, and unpredictability.

We live in a time when hierarchical organizational structures are “flattening out” (picture org charts slowly losing some rows). The idea here is that less hierarchical structures allow the company to be more efficient and adaptable. Having less hierarchy, however, also has the side effect of resulting in less structure, which then requires employees to be more comfortable with uncertainty and chaos. Instead of being told what to do, employees now often need to figure out themselves what to do.

We also live in a time when the economy constantly changes, and different factors, including technology and social media, create new challenges every day that we haven’t been taught to deal with.

All this to say that realistically, you can’t avoid chaos…it just might be a sign of the times.  You can’t really avoid uncertainty as well, and you certainly can’t avoid change.

So why don’t we just embrace it? Let’s just all embrace chaos, uncertainty, and change. Got it? Let’s ‘pack up and call it a day.

You may have realized this by now, but it’s really not enough to just “embrace chaos” (although we should). Just embracing chaos doesn’t really set your team up to succeed within it.

Think of going bowling as a kid. If you weren’t a great bowler (like myself), chances are, when you released that ball from your fingers, the ball spun chaotically in the lane for a few seconds before ending up in the gutter. Until somebody sets aside their pride and decides to put up the gutter guards, you’re stuck there for several rounds sending balls down the gutter.

Working with your team can often feel like bowling as a kid, which is why you need to set up your gutter guards to ensure that your ball ends up hitting the pins. In other words, you need to create structure around your chaos if you want to succeed.

So what does this look like on the ground? Really, it’s simply taking the time before a chaotic period with your team to set yourselves up to thrive within this chaos, then taking the time after the chaos to reflect on how you could have handled it better. These are your ‘gutter guards’.

Before you enter into a period of chaos (e.g., beginning of a new project), it’s important to take the time to clarify your team’s main goals during this period. Among the client teams that we’ve worked with, the teams that handle uncertainty and chaos the most effectively are the ones who are collectively focused on a specific, common goal. They key word here is specific – you and your team need to have a clear understanding of what you want to get out of this period of chaos.

With a clear, specific goal, your chaos can be directed towards productivity. Without it, it’s easy for the chaos to get out of control, resulting in lost productivity, distraction, time waste, and ultimately, failure. It’s also important to discuss at this time how each team member’s unique strengths can be used to take your team towards its goal. In other words, consider delegating tasks.

During the period of chaos, communicate. In order to navigate chaos successfully, team members need to be on the same page. Ensure that your team knows what you are doing, and how that contributes towards the team’s goal. Without this knowledge, several members of your teams can end up working on redundant tasks, which ends up wasting valuable time. Also ensure that you communicate what you need to your team. Chances are, someone in your team has the information, tools, or strategies that can help you solve whatever problem you’re facing, and save you a significant amount of time.

After the period of chaos, ensure that you take the time to reflect with your team and consider how you could have handled the chaos more effectively. There’s a massive amount of team research that has revealed that a team’s ability to learn quickly is a key factor determining its success. Take Sandra Fisser and Marie-Joelle Browaeys’ 2010 paper as an example, who suggest that “managing to out-learn one’s competitors leads to better performance with new ideas translating into lower costs, higher productivity, and/or increased revenue” (p. 58). Take the time to learn with your team.

Ultimately, the key to thriving amongst chaos is to create structure around it to turn that chaos into productivity. This means taking the time before the chaos (the calm before the storm) to prepare for it, and taking the time after it (when the storm passes) to reflect on and learn from it. Although it’s not always possible to anticipate when chaos will happen, a little bit of proactivity goes a long way.

In a Nutshell: 3 Steps to Thriving in Chaos

Next Step: Survive or Thrive

Experience Survive or Thrive – a unique team building program that puts your team through a series of engaging challenges that will give them an opportunity to practice goal setting, communication and reflection as a team – the three ultimate tools to thriving amongst chaos.

May 2020 Industry Update: A Month of Adapting to a New Normal
June 10, 2020
Team Building
Archives
Go to Top