Training to trek to the South Pole 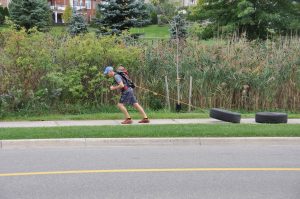 Although not the only factor in success on a trek to the South Pole it is a critical one and a prerequisite for participation.

When I first started climbing I did not need to train. Youth and natural athleticism was all that was required. I also had a lot more time to actually climb, so I stayed in shape by doing what I loved. Now that I am older and do not have the same time fitness training is critical for success in any of my adventure.

Training for a trek to the South Pole is different than training for a big mountain climb. They say the best way to train for any sport is to do that sport. In the case of the South Pole expedition we will be XC skiing for approximately 20km per day (for about 45-50 days) while pulling a 200LB sled loaded with all our food, fuel, gear, and camping supplies. The daily temperature will range from -20 Celsius to -40 Celsius not including the wind chill.

We are having a beautifully warm fall here in Ontario and therefore I cannot mimic pulling a sled in cold temperatures. But I need to find the best way I can to train given my environment.

A few years ago I did not place the same emphasis on sport specific training. I was preparing to guide an expedition to the magnetic North Pole with True Patriot Love. We would also be XC skiing pulling heavy sleds. It would not be as cold as the South Pole and the loads were lighter, but there are a lot of similarities.

I had a very good fitness level mostly from running. When I started the trek to the Pole I quickly realized the muscles I had trained to run, were not the same ones I was using to ski and pull. I suffered for this and it was a tough trip physically.

Realizing this past error I have modified my training program for the South Pole. I am still running, because cardio fitness is important, but I have added a pulling element to my training. I went to the local tire shop and got two large pick-up truck tires. Believing I was already strong I hooked up two tires to my backpack and started to pull. I could barely move them. Five minutes down the sidewalk was all I could handle. Humbled by this I removed one tire and started to work pulling just one tire around the neighborhood. I would start with a five mile run and then hook on the tire and pull for about an hour. We have some long gradual hills in the neighborhood and these provided lots of gravitational friction for my pulling. After a while the tire pull became too easy so I added a 15lb brick to the tire. Then that became too easy and I added another brick. The process was working and I was getting stronger by the day.

One day I wore a hole through my tire. I took this as a cue to remove the bricks and to hook on the second tire. The pulling of two tires was still difficult, but I could manage it (with many breaks) for close to an hour. This is where I am today and will continue to work with my two tires. I have about 7 weeks before departure so am hoping that perhaps I will get to the point where I will add a brick to my two tires.

So if you see some strange person walking down the road pulling a couple of tires, honk and shout some encouragement. It might just be me or it could be someone else with a dream.

Category: ExpeditionsBy Scott KressOctober 21, 2016
Share This Article
Share with FacebookShare with TwitterShare with Google+Share with PinterestShare with LinkedIn