The One Key Ingredient All Successful Team Building Activities Have

You are here:
Uncategorized 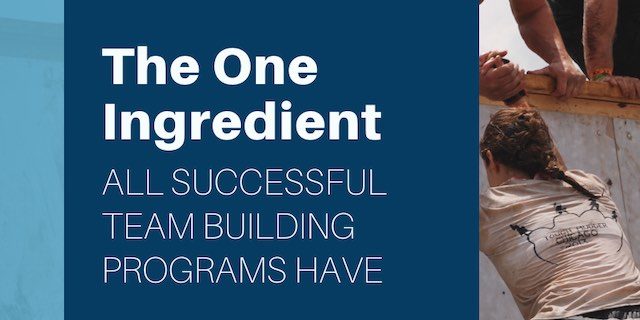 Every year, the people of Mauritius celebrate the Thaipusam festival towards the end of January and the beginning of February. For ten days leading up the festival, participants abstain from meat and sex, and express their devotion to the Hindu god Murugan through several rituals. One of these includes piercing multiple parts of their bodies with needles and skewers, and attaching hooks to their backs that are used to pull a cart for more than four hours.

Around late August and early September, Shia Muslims celebrate the Day of Ashura, which mourns the Imam Husayns ibn Ali’s defeat in the battle of Karbala in 680 AD. Participants in this festival slash their heads and back using swords and iron chains with blades…all until the streets are covered in blood. Literally (but don’t Google it).

These rituals are….interesting, to say the very least. But a question that these rituals raise is simple – why? Why have these painful, risky practices persisted throughout the history of cultures around the world?

So there’s an anthropologist from the University of Connecticut’s Experimental Anthology Lab named Dimistris Xygalatas, and he has an idea: perhaps these rituals have persisted because they actually serve a fundamental purpose in these societies. The purpose? They help foster strong social bonds.

Here’s the big idea: apparently, there’s something about pain that helps create strong social bonds. I mean, think about the way that groups behave during natural disasters. The social connection that you often see within groups during disasters isn’t just accidental – psychologists have found that there actually is something about natural disasters that help promote cooperation. It’s a part of our humanity.

Now, what does this mean in the context of team building?

Well, slow down. No, your team building activities shouldn’t be painful, and yes, if it is, you’re doing it wrong. Before we start talking about the implications that these ideas have for team building, though, let’s take a quick moment to further flush out what the psychological research tells us. It’s interesting, we promise.

Late last year, the journal Frontiers of Psychology published a fascinating study that explored the relationship between teams, shared adversity, and – get this – creativity.

As we’ve talked about in past posts, innovation and creativity are some of the most critical tasks that teams of today’s competitive corporate environment need to accomplish. Companies that fail to be innovative get left in the dust, so how we can build innovative and creative teams is a multi-million dollar question. This research identifies an incredibly important piece of this puzzle.

The researchers took their sample of 180 participants and put them in 55 groups of 3-5 members. Half of those groups – the unlucky ones – were randomly assigned to the pain condition, while the luckier half were assigned to the no-pain (i.e., baseline) condition.

The groups that were assigned to the pain condition were asked to complete two tasks aimed to…well, induce pain. First, they were given a plate of raw (very spicy) Birds Eye chilies and asked to eat as many as possible. Then, they were asked to perform an upright wall squat for as long as they can. Feel the burn, I guess.

The luckier groups were asked to perform similar tasks that induced significantly less pain. After completing these initial tasks, all teams were asked to complete two additional challenges that were meant to assess their creativity: they were first asked to name as many ways of using a brick as possible and were then asked to create a work of art. Observers assessed their level of creativity and their group dynamics.

After integrating their data across all of the groups, the researchers found a surprising pattern: teams that shared painful tasks exhibited significantly more supportive interactions (i.e., encouragement, cooperation) than teams that shared the painless, control tasks.

And here’s where the results get even more interesting – the increased levels of supportive interactions actually predicted an increase in the teams’ levels of creativity.

In other words, if you’re looking to build an innovative and creative team, you would need to build a team environment that is supportive and interdependent. It is within this kind of team climate where members can feel comfortable expressing different ideas and connecting dots. One effective way of building this kind of environment, according to this research, is having members go through adverse experiences together.

SO WHAT DOES THIS HAVE TO DO WITH TEAM BUILDING?!?!

Now we’re not suggesting that you should intentionally put your team through the pain. And let me say that again louder for the people at the back – putting your team through intentional pain in the name of building relationships is a terrible idea. All we’re saying here is that perhaps there are some silver linings to going through hard times.

We’re also not suggesting that team building exercises should ever be painful. Simulated hijacking, forced firewalking, and waterboarding are terrible ideas for team building (it’s been known to happen, just for the record). That’s just…abuse.

But what we can pull from this research is that great team building activities always have a level of manageable challenge and difficulty that require team members to lean on and support one another.

Ultimately, the challenge is the one ingredient that all successful team building activities share.

It’s why all of our team building programs are all structured around activities that are, at the same time, challenging and enjoyable. Balancing the need to both challenge teams and engage them is a delicate craft that the Summit team has spent years mastering.

For example, while our Put Your Chef Hat On! and Ice Cream Making Challenge programs are competitive, culinary-based challenges, our Art of Team and Building Bridges program are collaborative, creativity-based challenges.

Now if you’re looking for a program that really challenges your team, we’ve designed four outdoor programs that intentionally bring your team outside of their comfort zone: the Reaching New Heights, 7 Summits Challenge, Altitude Challenge, and Trek to the Top programs. There’s a whole new level of bonding that happens when team members are right at the very edge of their challenge zone.

So let us leave you with this question – how will you be challenging your team in your next team building event?