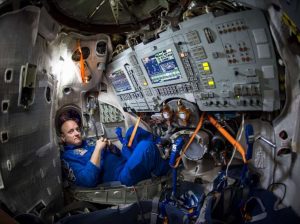 Scott Kelly aboard the ISS

Team building and teamwork are critical for success. Astronaut Scott Kelly has just returned from a record breaking 340 days in space. After spending close to a year on the International Space Station Scott Kelly has landed back on earth. The science rich mission was in-part used to test human endurance in zero gravity as part of the planned future expedition to Mars and its success was in large part attributed to teamwork.

Upon his return to earth, astronaut Scott Kelly spoke of the important role teamwork played on his space mission.

“A really smart person said to me one time, ‘Teamwork makes the dream work in spaceflight,’ and spaceflight is the biggest team sport there is,” Kelly said Monday. He acknowledged each of the 13 U.S., Russian, European and Japanese space fliers with whom he and Kornienko lived during the past year. “It’s incredibly important that we all work together to make what is seemingly impossible, possible.”

One definition of high performance is: A high performance team is as a group of people with specific roles and complementary talents and skills, aligned with and committed to a common purpose, who consistently show high levels of collaboration and innovation, that produce superior results. Team relationships are built on trust, support and respect

When you combine skills, experience and teamwork you can achieve results that go beyond what was expected. Essentially in a high performance team 1 + 1 = 5. 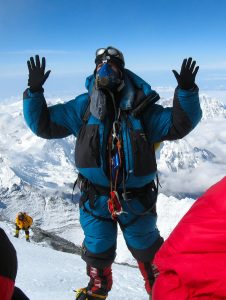 Scott Kress on the summit of Everest

When I was climbing Everest there was a group of researchers from Brown and Harvard Universities sharing our base camp. They were researching the impact of team culture on summit success. Their hypothesis was that a dysfunctional or poor functioning team would have a negative influence on individual and team performance and on ultimate summit success. I did not see the results of their study, but from my own informal research, I can say their hypothesis was correct.

I experienced the impact of team culture on results first hand when climbing Cho Oyu in Tibet. We had a team of talented and experienced climbers and yet we could not get ourselves together to become a team. We did not bond together and form supportive relationships, this led to low levels of trust among the team and this promoted silos, selfishness and lack of communication. Nobody was really committed to the team and there was no accountability. Ultimately we failed. Not a single person, all of who were totally capable, made it to the summit.

At Summit Team building we believe that teamwork is the most important factor in organizational success and this is what we focus on in our team building programs. Our goal is to help you build the best team foundation possible from which you can attain high performance results.

Check out our Team Development and Team building program and see what we can do to help your team become high performance.