Team Building: Does It Work? 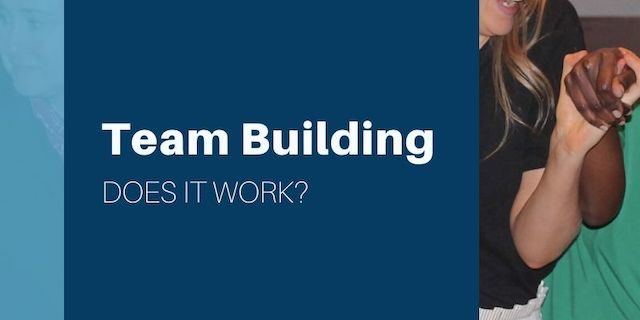 What is team building, and does it actually work?

Alright, so in an attempt to present dry research findings in a way that wouldn’t put you to sleep, I’ll tell you a short little story of my imaginary friend, Carrie. It’s a little silly but bears with me.

Carrie was pondering the question of whether team building actually works as she skimmed a Forbes article on teams at the end of her workday. She is a mid-level manager at a local branch of a public bank and was recently put in charge on managing a newly put-together task force. She’s still relatively new to her position and had little experience with managing small teams, but she was determined to help guide her team towards excellence. Carrie knew that organizations are increasingly moving towards collaboration and team-based structures, so she knew that she had to figure out how best to manage teams if she wanted to move forward in her managerial career. She had heard from her mentor that hiring a team building company to come in and deliver programs to help the team gel was a really worthwhile investment, but she had her doubts. Every time she thought of team building, she thought of Michael Scott’s ridiculous antics on The Office. It all just seemed like fluff…

But there was something about team building that fascinated her, and she wanted to figure out if it was actually going to help her team work together better. She’d heard anecdotes and stories from her friends and colleagues, but something inside her told her that that wasn’t enough. Her mind took her back to a research methods class that she took in college for some reason, and it got her wondering about what research said about the effectiveness of team building programs. So…she did some digging.

That night, she spent a few hours browsing through some research studies that have been done on team building and came across a 2009 article on a study conducted by Cameron Klein and his associates. It was a meta-analysis, which she remembered as a strategy that researchers used to combine the findings of multiple studies. Carrie knew it was complicated, but she also knew it was powerful – the findings of meta-analyses are more trustworthy than that of any single study.

This 2009 study looked at four potential outcomes of team building programs: (1) cognitive (e.g., does the team understand how to work together?), (2) affective (e.g., does the team trust each other?), (3) processes (e.g., can the team members communicate with one other effectively?), and (4) performance (e.g., how productive is the team?). A big issue on Carrie’s team was that although the members were among the top performers at the branch, their meetings were awkward. They didn’t seem to feel comfortable with one another at all, and she couldn’t figure out why. She jumped ahead to the Results section of the article, and what she found gave her some hope. Apparently, their data analyses found that team building programs seemed to impact affective outcomes more so than the other outcomes that they studied. The most important finding from this study for Carrie, though, was that the authors found that team building had a positive impact across all team outcomes that were measured. Alright, so maybe this team-building thing was worth a shot…the research seemed to support it!

AAAAND…scene! Carrie’s story is my goofy way of telling you that the most recent and comprehensive study on whether team building works found that it, in fact, generally does. It seems to be most effective in fostering trust and communication (among other team processes), and goal setting and role clarification are two of the most important aspects of these programs.

But…the authors also warn that “not all teams will benefit from the same team-building intervention” (p. 215). When deciding on which team building program to invest in, it’s important to ensure that it’s specifically tailored to your needs and goals. Although research can tell us whether programs are generally effective, it’s important to remember that every team and situation is unique. These findings can, and should, give us comfort that team building is a worthwhile and safe investment, but we should also be careful that the program that we invest in fits our specific needs.

Connect with Summit Team Building today to learn about the ways that we can tailor our programs to help you achieve your unique goals for your team!

What does empirical research say about the effectiveness of team building? Does it actually work? According to the most recent and comprehensive research study that has been done on this topic so far, yes, it generally does…but it’s a bit more complex than that. Using a sophisticated data analysis technique called meta-analysis, Cameron Klein and his associates collected and statistically compiled the findings of 20 separate research studies (looking at 1562 teams) on the effectiveness of team building programs in 2009.

The studies that were included in their analyses assessed four categories of potential outcomes from team building programs: (1) cognitive (e.g., declarative knowledge, teamwork competencies), (2) affective (e.g., trust, team potency), (3) processes (e.g., coordination, communication), and (4) performance (e.g., volume of sales, productivity). Also, these studies looked at four common components of team building programs, including goal setting, relationship building, problem-solving, and role clarification. After analyzing their data, they found that team building had a positive and moderately strong impact on all four categories of outcomes that they looked at. More specifically, though, they found that process-related and affective outcomes were most improved by team building programs. Interestingly, they also found that the goal setting and role clarification components of these programs had the largest effect on participants. Finally, although they found that teams of all sizes benefited from these programs, large teams seemed to benefit the most.