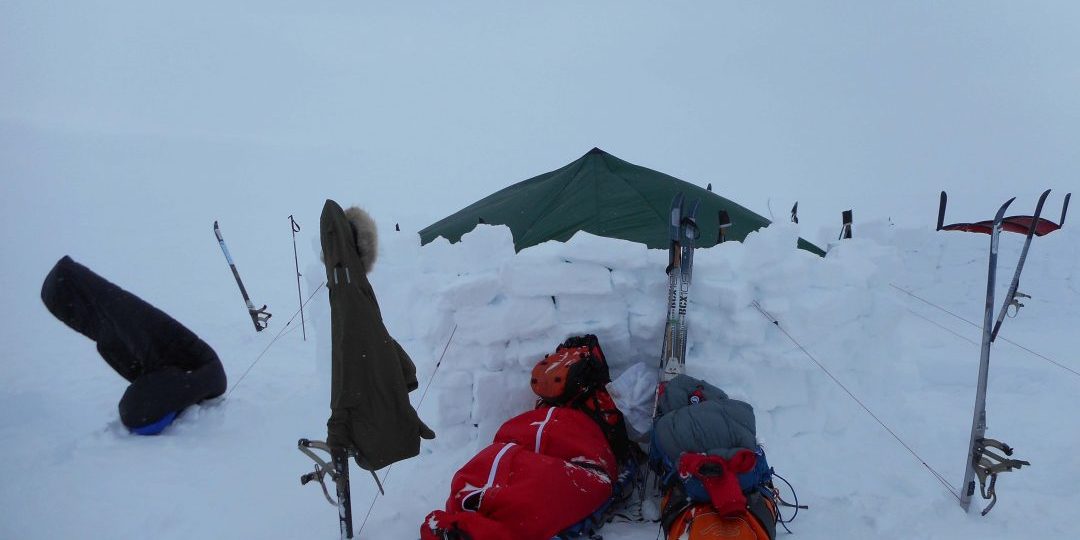 We are sitting in the tent with wind burned faces. We decided to wake at 6:15 and work hard to be on the trail for 9:00.

The sky was blue with no clouds and it was about -20 with a light head wind which dropped the windchill to around -30.

We set out on hard backed and relatively flat snow. There were a few sections that required route finding, but much of the day was pretty straight forward allowing us to get in some good distance.

We started with Thor Island way off in the distance and by the end of the day it was behind us. We did 6.5 ski blocks for 19.5km.

We can see the peninsula of Ellefringis Island where we will enter our land crossing. Everyone is doing well and we are comfortable and warm in our tents.

One element that adds a lot of fun is our polar bear dog names Puppy. Puppy is 5 years old and is a very nice Husky. For the first few hours on day 1 we tried to ski with him on a leash and it was very difficult as he kept getting tangled in all our sleds. After a while we just unhooked him and he took off. Pretty soon all we could see was a small black dot on the horizon. We were a little worried he was heading for him, but after a bit of exploring he was back.

He now walks beside us all day and sometimes goes ahead to explore. Every now and then he stops and watches everybody ski by getting a little scratch from each person. At night we build him a little sleeping spot with some
snow blocks and a insulation pad. He has become a great part of the team and fits in well.

The landscape is stark, but beautiful. It has been consistently cold and a light wind each day. Everyone is doing well.

Good night from the ice.