Rolling with the Punches: How to Build a Problem-Solving Team

You are here:
Team Building 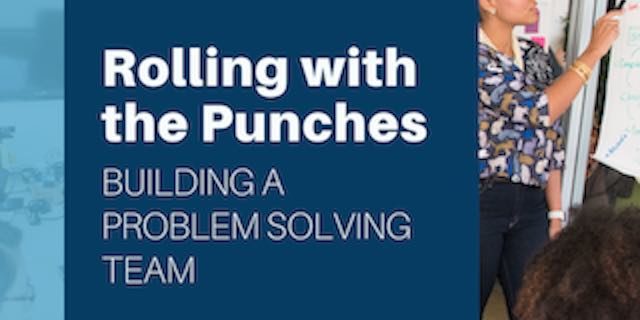 The Iqaluit airport is new and very nice. We settled in for our 3-hour wait for our next flight to Qikiqtarjuaq. Unfortunately, that flight never came. Due to a blizzard and high winds in Qikiqtarjuaq, our flight was canceled. We started calling hotels, but because of a mining conference in town, all the hotels were full. We tried every option we could think of with no luck.

– Scott Kress on the first day of his Baffin Island expedition

What a way to start a trip.

If you were Scott in this situation, what would you do?

So the ultimate question is this – how well do our teams deal with unexpected problems?

So how exactly did this situation play out? Spoiler alert: it’s good news.

We accepted we would be spending the night on the airport floor…but then the military came to our rescue. Our team doctor, who is military, called a few people and before we knew it, there were transport vehicles waiting to take us to guest barracks. The two guys helping us were great and the accommodations are perfect. Each person has their own dorm style room and there are even showers (but we have no towels).

Aside from the no-towel issue, all in all, Scott’s team were ultimately successful in rolling with the punches and adapting to the unexpected situation. Scott’s team was able to adapt and utilize the connections they had with the local Air Force in Iqaluit to resolve this situation way better than they could have anticipated. The numerous days that Scott spent building an adaptable and resilient team over several months leading up to the trip paid off.

But here’s the catch – teams that can successfully weather unanticipated storms don’t just…happen. It takes insight and intentional strategies to build these teams.

Let’s break this situation down a little bit in order to figure out how Scott’s team ultimately succeeded in adapting.

On the surface, it seems like a simple solution to the problem. The Phone a Friend option is no new strategy.

But there are two underlying themes here that allowed Scott’s team to successfully adapt that we can apply to our lives in the corporate world.

First, Scott intentionally created a team culture that was agile, adaptable, and ready for change. Over the several months that Scott spent building his team, he established that adaptability would be a requirement in this trip, and forewarned his team that things were not always going to go as planned. Consequently, his team was ready for things to not go as expected. When it actually happened, they were ready and able to get to work and find a solution.

Second, Scott’s team members had connections that they could leverage when they needed it the most. I know, I know – connections and networks are dirty words, and it makes it sound like we’re taking advantage of other people. But the truth is, we need the help of other people in our lives. Others often just have resources that we don’t. Having a wide network sets us up to be able to have support when faced with a wide variety of problems. Relationships are everything.

Has your team built a wide enough network around them to support them when they’re faced with unexpected challenges? Do your team members have someone on the other side of the line when they ask to Phone a Friend?

Researchers call the knowledge and resources of others that people tap into when trying to solve problems connective capital. The more connective capital teams have, the better they will tend to be at solving problems, and ultimately, the more likely they are to reach higher levels of productivity. Pretty intuitive, right?

There’s also a ton of empirical evidence, including this 2014 article published in Nature’s Scientific Reports, that directly links teams’ connective capital to their performance. This American and Danish team of researchers found that the relationships that team members had with both others within the team (i.e., within-team networks) and those outside of their team (i.e., extended networks) directly benefitted their performance…but there’s a catch: it’s only the strong relationships in teams’ networks that actually impact the team’s performance.

In other words, a team’s ability to problem solve and perform will only benefit from the strong ties within team members’ network. The strength of the relationships matter…a lot.

But what exactly is a strong relationship?

The researchers quantified the strength of relationships based on two things: first, the level of friendship, and second, the amount of time that the individuals spend together.

A 2015 study published in the Journal of Occupational and Organizational Psychology looks at another key element of strong relationships that we often overlook: the extent to which individuals show genuine interest in and concern for the other’s needs.

There’s a lot going on there, but essentially what these researchers found was that the extent to which team members cared about one another influenced their readiness to innovate, which then predicted their ability to adapt to their environment and solve problems.

So here’s the moral of the story: if you want to build an adaptable and problem-solving team that can roll with the punches, you need to build team members’ network. Strong, caring relationships – both between team members and with those outside of the team – are the key to adaptability.

I mean, if Scott’s team doctor didn’t have a relationship with a Sargent in the local Air Force in Iqaluit who cared enough about him to pick their whole team up on his day off, it was likely that their team would have had to spend the first evening of their expedition on the airport floor.

All of our team building programs were designed with the main objective in mind of building relationships within an informal and fun, yet professional, context. Whether you’re looking to build relationships between team members, or across departments for your offsite, these programs are a great place to start if relationship-building is something your team needs.

Now if you’re looking to specifically hone in on the topic of adapting to unexpected problems, and are interested in hearing more about Scott’s journeys, the Learning In Thin Air Keynote Workshop is a program we’d recommend. Scott’s got plenty of stories to tell about unexpected challenges and difficult situations, and the insight that he pulls from those experiences will undoubtedly resonate with your team if adaptability is something they need to develop.

Why an Inspiring and Positive Keynote Talk is Critical for Team Recovery
June 4, 2020

The Circle of Influence Model: A Pro-Active Tool for Anxious Times
April 16, 2020