You are here:
Corporate TeamsTeam Building 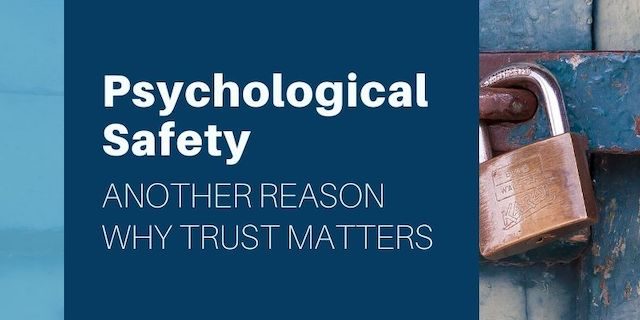 In my previous post, I reviewed some research conducted by Google that identified psychological safety as the most fundamental characteristic of high performing teams. After writing the post, I got curious about the relationship between psychological safety and another big word in research on teams – trust. Do these two ideas essentially describe the same thing? If not, what’s the difference?

Let’s be honest, it’s a very minor difference. While the distinction may be important for researchers trying to assess the different components of teams, for the rest of us, it’s really two sides of the same coin. At the end of the day, what both of these ideas suggest is that team members’ perception of whether they can trust other members of their group is critical to their performance.

Like I reviewed last week, Google suggests that this is because teams where members trust each other are better able to support each other, tackle tough issues openly, and embrace diverse skills and perspectives. Interestingly, in his work on team trust, Patrick Lencioni provides a complimentary perspective on this issue.

Like Google, Lencioni also sees trust as fundamental to team performance. When team members trust each other, they’re not afraid of conflict, so they are able to have unfiltered and passionate debates about their ideas. When team members are able to honestly talk about their ideas, they’re able to generate plans and strategies that they can all buy in and commit to. With all members buying in, you end up with a culture where it’s normal for team members to keep each other accountable, and take full ownership of their results.

Lencioni’s perspective gives us an even deeper understanding of why trust matters in teams. But the more important point that we can take away from this is the fact that Google and Lencioni’s work both ended up essentially coming up with the same conclusions. Google spent millions of dollars and two years on their project, and Lencioni has worked with thousands of different companies before proposing his model. This underscores exactly how fundamental trust is for team performance.

So the truth is – trust is powerful.