How You See Your Team Has Consequences 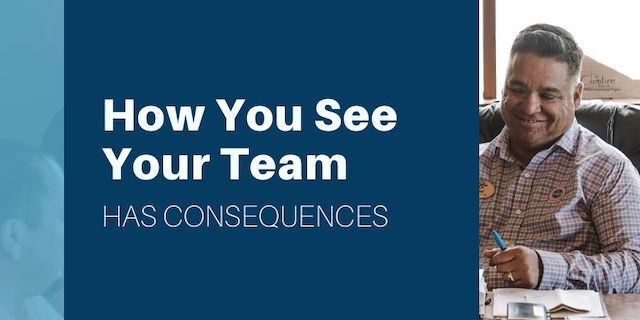 You work for a mid-sized tech company, and your boss decides to put together a temporary team (or task force) to deal with a common complaint that the company has been receiving from client surveys – the front-line, customer service representatives are impatient and unenthusiastic. Your products are state-of-the-art, but you’ve been slowly losing business to your competitors over the past year. It’s evident to everyone, except the front line staff, that the poor customer service has had a major role to play in the company’s decline over the past year.

Like companies around the world in this era of business, your company has been increasingly relying on temporary teams to deal with major issues that arise. Gone are the days of long term, intact teams – many companies are now realizing that quickly putting together teams, and disbanding them once the issue has been resolved, is the key to staying agile.

Fortunately (or maybe not), your boss puts you in charge of this temporary team. He also assigns four other young members of your department, who are new to the company, and two other veteran staff, who you don’t know well and don’t presume to be all-stars, on the team. You’re frustrated that you weren’t able to get staff that you’re more familiar with on the team, and don’t think you’ve been dealt a strong hand. You’re not expecting much from the team.

Unfortunately, your low expectations may have already set you and your team up for failure…even though your team was perfectly capable of succeeding at its task. Here’s why.

In a new study published earlier this month in the Small Group Research journal, researchers from the University of Delaware recruited 540 undergraduate students to take part in a study looking at the power of initial expectations in teams. The students were randomly assigned to teams with five members each, and the teams were put through a computer simulation designed with the help of the United States Air Force. Even though they were not familiar with one another, the teams needed to collaborate with one another and problem solve in order to find and engage enemy targets, which earns them team points.

After analyzing the data they collected, the researchers found that teams with higher initial expectations, who indicated that they expected their team to perform well on the task, ended up performing significantly better than those that had lower initial expectations. In other words, team members’ snap judgments of their team, often based on factors such as age, gender, and initial impressions, significantly impacted how their team ended up performing. Their expectations mattered!

And here’s where the research gets even more fascinating. According to the data, the reason that these initial impressions mattered was because they affected the extent to which the teams took risks during the task.

The logic behind these findings is this: when teams anticipate poor performance, they are likely to experience self-doubt and envision impending failure. Even within this ‘loss context’, where they expect to fail, team members are still inclined to find ways to avoid failure. This biases their decision making process, and they become more willing to take larger risks in order to avoid this anticipated failure.

While risk taking itself doesn’t necessarily lead to decreased performance, making frequent highly risky decisions can lead to detrimental consequences. In the study, teams who expected their team to perform poorly were more likely to make unescorted missions to unknown spaces in the game. There was a chance that they could have scored higher points that way, but they were just as likely to be attacked by the enemy and lose points. At the end of the day, the teams that made more risky decisions performed significantly worse than those who made more conservative decisions.

On the other hand, when team members expect their teams to succeed, they are more likely to feel secure and confident. When making decisions, they don’t have the same pressures to take major, potentially devastating risks as those who expect their team to fail. Ultimately, the research suggests that these teams often end up performing significantly better.

So the message to take home is this – check yourself. Pay attention to the expectations that you have for your team – you’ve likely already set your team up to fail if that’s what you’re anticipating, especially if you’re leading the team.

Perhaps attitude really does determine you, and your team’s, altitude.

The Circle of Influence Model: A Pro-Active Tool for Anxious Times
April 16, 2020