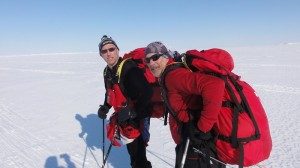 Any adventurer can tell you that a journey to the North Pole is a serious exercise in strength, determination and physical and mental power, but did you know that a trip like this can also be used to create electric power? Bill Ostrom, a creator of high performance backpacks and long-time supporter of Polar adventurers has developed the Go Kin Pack, a new technology that harnesses the energy from walking to generate electric power. A prototype is in the field and the project is collecting pledges on Kickstarter to get the product on the market.

Ostrom was proud to support a recent expedition this spring, outfitting The True Patriot Love team with the packs they took to the North Pole. The team included 12 armed forces veterans, mountaineer/entrepreneur Scott Kress and was led by Richard Weber, the only explorer know to have completed an unsupported journey to the North Pole. The journey was completed on skis, so the team was unable to try out Ostrom’s Go Kin Pack, but in the future, it might be a possibility. Ostrom is thrilled to see his backpacks being part of such an incredible journey and looks forward to a day when his Go Kin Packs will use to help more Canadians explore the wilds of their country.