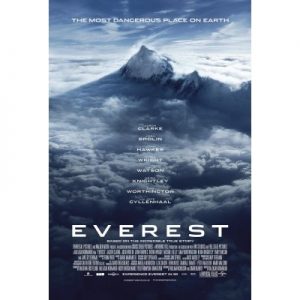 Well Everest has made it to Hollywood. Love it or hate it, Everest is on the big screen. I saw the movie in Imax 3D and as one who has been to the top of Everest thought I would share my thoughts of the film.

First of all, I liked it. I would not say it was the best movie I have ever seen, but it was well done, realistic, and not unnecessarily dramatic.

The movie shares the well-known story of the tragic events that took place on Everest on May 10th, 1996 when 8 climbers lost their lives. This is such a complex story that I wondered how they could tell it within a 2-hour movie and do it any justice.

The answer is to focus on only a few of the participants on the ill-fated climb. Rob Hall and Scott Fischer feature heavily, as they should, as the head guides for Adventure Consultants and Mountain Madness respectively. As do Doug Hansen and Beck Weathers, two of the climbers on Rob Hall’s team.

John Krakauer, Yasuka Namba, Andy Harris and others play a small part in the Hollywood story, but their connection to this tragedy cannot be simply forgotten about.

As a climbing movie I felt the director did quite a good job regarding realism. So many Hollywood movies invent technology and events to make the story more dramatic. As the saying goes “never let the truth get in the way of a good story”. This story, however, needs no props to create drama. Although a non-climber may not understand all the nuances of high altitude climbing and the related tools and techniques, the movie did not greatly embellish this and presented a pretty realistic portrait of what it is like to climb Everest.

I felt the story moved very fast and some of the climbing scenes were cut short and the character development was a little light. That being said it is a complex story that would be difficult to tell in 2-hours so something had to give.

The cinematography is breathtaking. In 3D it almost feels like you are there. The shots of Everest are spectacular and took me back to climbing it myself. The green screen, studio, and other shots made to simulate Everest were very well done and in many cases were difficult to tell from the real thing.

As a drama, the movie does a fantastic job. There were quite a few tears shed in the theatre I was in. The loss of life and the disruption of life are real and hits you heavy in the heart. The movie wrapped up suddenly leaving me with a feeling of wanting more. More story. More about the people. More about the aftermath. But the time was up. Having read any of the multitude of books about this tragedy is a definite edge to help fill in the gaps left by lack of time.

Overall I enjoyed the film and would recommend it to others. It does a good job portraying the harsh reality of high altitude mountaineering and telling the story of the tragic events that are a part of Everest history. Perhaps this movie will make some thrill seekers think twice before signing up to climb Everest, then then again probably not. They say there is no such thing as bad publicity and this movie, combined with two recent very tragic seasons on Everest will likely have the exact opposite effect it should and the numbers of climbers heading to Everest will likely continue to increase as a result.

Go see the movie. Take it for what it is. Do not judge what happened because you were not there. Those who have been above 8000m will understand the reality it brings with it.

Category: Team BuildingBy Scott KressOctober 13, 2015
Share This Article
Share with FacebookShare with TwitterShare with Google+Share with PinterestShare with LinkedIn

Rolling with the Punches: How to Build a Problem-Solving Team
January 30, 2020