Everest: So why is Mount Everest so dangerous? 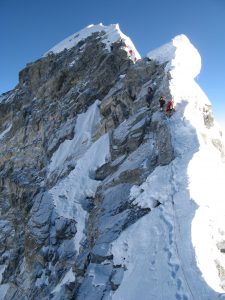 8000m. This is a very dangerous altitude and one that humans are not built to withstand. Over the years the tragic reality of going above 8000m has caused climbers to give this thin-air region the name “the death zone”. While this is a very dramatic term, it means exactly that. If you go above 8,000m for too long, you will die, guaranteed. And just how long is too long? It can be anywhere between 1-4 days at the most.

Of the 14 mountains in the world that rise into the death zone Everest happens to be the tallest at 8,848m.

The altitude above 8,000m is so dangerous that the human body can no longer regenerate cells. If you get a cut above 8000m it will not heal until you drop to a lower altitude. Your immune system does not work as well and antibiotics are practically useless. The rapid death of body cells is caused by a combination of oxygen deprivation and pressure changes, and by the way, our body reacts to these changes. As our cells die and are not replaced, our body enters a “triage” state. It starts shutting down less important bodily functions by reducing oxygen and blood flow to the muscles, brain and extremities. This becomes a rapid chain reaction of events that, in turn, lead to a quick downward slide toward extreme fatigue, lassitude, incapacitation, unconsciousness and eventually heart failure. Assuming you do not die of hypothermia first.

This is not the only thing happening to your body at high altitude. Your body is accustomed to operating in a pretty narrow range of atmospheric pressures. Once you go above around 4,000 metres your body loses its equilibrium. Due to the lower atmospheric pressure, fluids begin to leak from your cells, veins and capillaries. These fluids can pool in your lungs (pulmonary oedema) or in and on your brain (cerebral oedema). Both can quickly cause death if not treated, and the only real treatment is rapid descent to lower elevations where your body can regain its equilibrium.

If you are near the summit of Mount Everest and cerebral or pulmonary oedema sets in, you are in big trouble. It is unlikely you will be able to descend fast enough to alleviate the symptoms. The more it sets in, the more you become mentally and physically incapacitated, reducing your ability to descend even more. Afflicted climbers will frequently stumble and fall off the route or just sit down and die. They will make poor decisions. They will start to hallucinate and some will become combative to those who try to help them. It is a very frightening situation to be in.

Pure, simple and extreme exhaustion is also blamed for many deaths on Everest and the other high mountains of the world. By the time climbers start their summit bid they have usually been on the mountain for at least six weeks. They have not slept well for much of that time and they have lost a considerable amount of weight and muscle mass. They have likely not eaten much for days, and have burned tens of thousands of calories. They are far from the picture of the top fitness, and now they must now push their bodies harder than they have ever pushed before. While the goal of reaching the summit is a very strong motivator, once it has been achieved, many climbers are unable to maintain the focus and motivation necessary for descent. I have been told that close to eighty percent of all climbers who die on Everest do so after reaching the summit (this % may have changed with all the recent deaths in the icefall and at base camp). They die on the way down. They simply run out of gas, sit down, close their eyes and never get up again.

I have not even begun to discuss hypothermia, hypoxia, avalanches, snow and wind storms, extreme temperatures, rock and icefall and the myriad of other potential dangers on Everest. The fact is that Everest is a bloody dangerous place and needs to be respected for the power it holds.

If you are intrigued by Everest, go into it with open eyes. Get the education you need and prepare. Yes, it is a dangerous place, but given the right preparation, training and experience you can reduce, but never eliminate, many of the risks involved in a climb of Everest.

Category: Team BuildingBy Scott KressNovember 10, 2015
Share This Article
Share with FacebookShare with TwitterShare with Google+Share with PinterestShare with LinkedIn