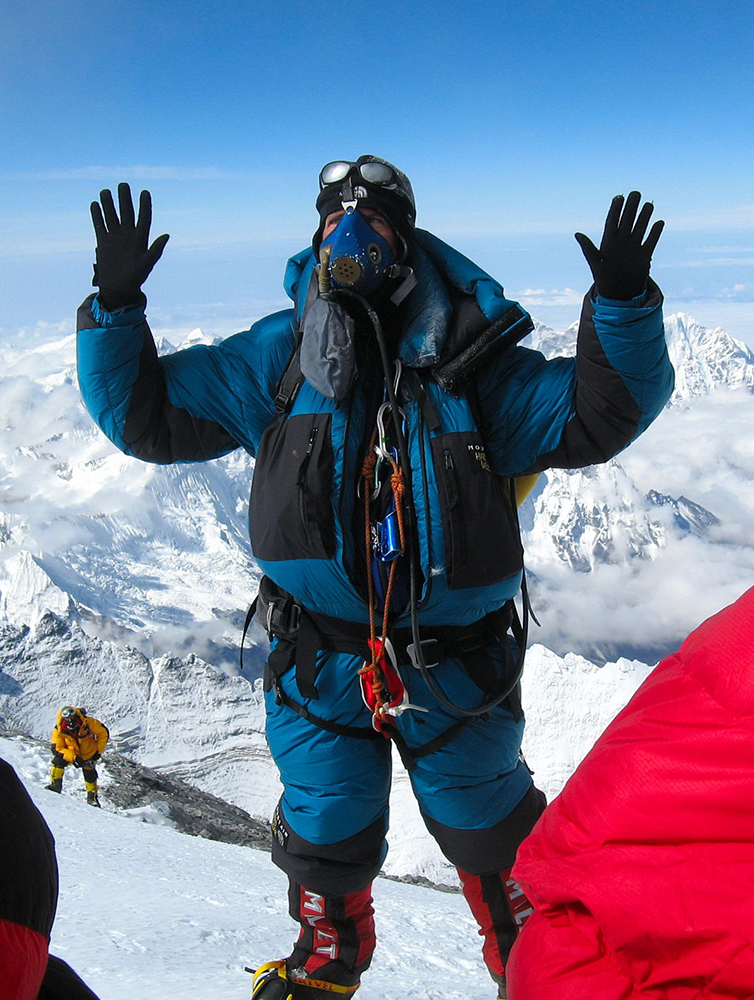 It is hard to believe it has been nine years since my summit of Mount Everest. Time sure flies when you are having fun. Even after nine years Everest still has a magical hold on me and a special place in my life. Everest has given me so much.

I never imagined I would climb Everest one day. I knew as a climber that is was out of my league. However, as I gained more experience my comfort zone expanded and I thought that perhaps it was worthy of a try.

After a failure on the 6th highest mountain in the world (Cho Oyu) in 2001 I put a lot of learning into future expeditions. Although I did not summit Cho Oyu, it became one of the greatest learning experiences of my life as failure often does (to those that are open to it anyway). We had failed due to a dysfunctional selfish team culture driven by an egocentric and abusive leader. We were not a team and we did not trust, support, communicate or collaborate with one another. Even though we had the skills, experience and fitness this was not enough to overcome the dysfunctional team environment and we failed miserably.

After Cho Oyu, I applied my team and leadership learning to several other mountains and after many successes, I thought I was ready for Everest.

In 2008 I went to Everest with my climbing buddy Angus and three others I did not know. We worked hard to build strong, trusting, supportive relationships because I knew that relationship was the foundation of a high-performance team.

Our original plan was to climb Everest via the North Col from Tibet, but due to circumstances beyond our control our permit was cancelled and the border into Tibet was closed to foreigners. We had to relocate our climb to Nepal which was a huge change for us and caused much anxiety and stress.

We worked hard to overcome this initial challenge and made our way to base camp to begin our ascent. However, international politics were not done with us yet. Again for circumstances beyond our control the military occupied the mountain and enforced severe restrictions upon all climbers, dictated when we could and could not climb, where we could go and they even confiscated all our video cameras and satellite phones. Anyone who rebelled was arrested and deported from the country.

To make a long story short, this was just the beginning of the challenges we were to face individually and as a team. We fought our way up the mountain through numbing temperatures, avalanches, wind storms and more and eventually on May 20 we were hunkered down on the South Col in our Camp 4.

We were now entering the Death Zone for the final push to the summit. We left camp at 8:30pm on May 21 and climbed steadily through the night. And a beautiful night it was. A cloudless sky, a bright full moon (so bright I did not need my headlamp on), and relatively warm temperatures with a light wind. There was a bit of a crowd that day with many very slow climbers in front of me. Passing is not really an option so patience was the word of the day. We passed various famous landmarks on our way to the top; The Balcony, The South Summit and the Hillary Step.

At 8:15am on May 21 I stood on the highest point on earth, let out a sigh of relief, smiled and cried. It was an amazing accomplishment, but I was only half way. Going up is harder, but going down is more painful. As your adrenaline levels drop the pain seeps in to fill the void. Going down is also very dangerous with a high percentage of deaths occurring on the way down.

We made it back to base camp May 23 and then started our journey back home to family and friends. What am amazing journey it had been.

Everest taught me a lot about myself, about team building, about leadership, goal setting, overcoming the challenge and so much more. I have gone on to use much of this in our Team Development and Team Building programs at Summit Team Building and especially in my keynote presentations.

I am fortunate to have such a great story to share from Everest and my training and academic background allow me to translate my experience into learning opportunities for others. I will deliver over 30 keynotes in 2017 to audiences around the globe.

I want to thank Angus, Alan, Ryan and Al for making this incredible journey with me.