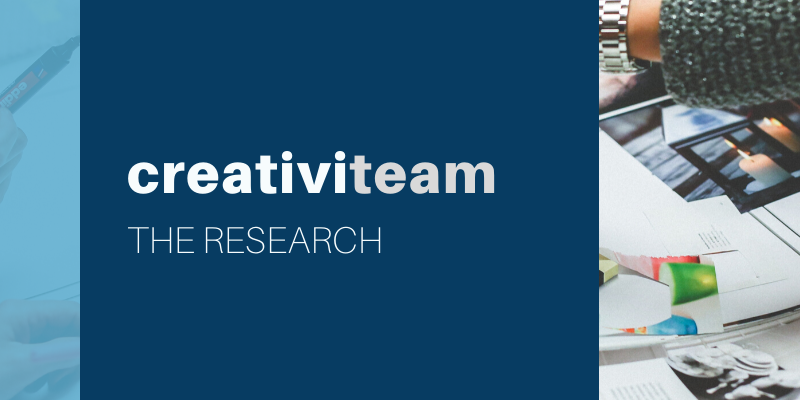 If you’ve landed on this post, we’re fairly confident that you don’t need us to convince you that creativity is one of the most important solutions for addressing the numerous challenges that face companies today. So we’ll save you the time – you’re welcome – and get to the point: we’ve been going over many of the most recent studies on building creative teams over the past month, and we’d like to share with you some of these research-backed ideas that might help you build a super creative team right in your very own office.

But here’s the catch. Building a creative team takes more than a quick email encouraging your team to be more creative or a 40-minute whole-team brainstorming meeting. You need to create an environment (or culture) within your team that is fertile soil for creativity.

In our decades of work in the team development field, we’ve learned that shared experiences are one of the most powerful ways of shaping team cultures. But we’re not just talking about throwing a party for your team, going out to lunch together, or laser tag. Although we’re certain your team would appreciate all of those things, powerful shared experiences that shape your team’s culture need to be intentional.

We’ve found four key themes that have emerged from social science research that can give us some wisdom regarding what these intentional shared experiences need to look like. These are things that we – in addition to folks who have spent years studying teams – believe you should aim for when deciding what team building experiences to put your team through in order to foster a culture of creativity.

1. Your event should allow you to clarify the vision.

If you’ve been following our earlier posts in the Creativiteam series, you may recall that a 2009 analysis of all of the studies that have been conducted over the past three decades regarding team creativity revealed that vision emerged as one of the strongest predictors of team creativity. So what does this tell us?

Your team building experience should give you a chance to clarify what the ultimate goals of the team are and to make sure that everybody on your team is on the same page. It also probably wouldn’t hurt if you communicated it in a way that motivates and inspires the team to buy into the goal. But the point is this – there’s a surprisingly strong relationship between vision and creativity in teams, and it’s interesting that the more your team is focused on a specific target, the more likely they’ll be creative in trying to reach it. If you’re looking for some help with clarifying your team’s mission, consider the Facilitation Services that we offer.

2. Your event should focus on building relationships.

According to the same study that I cited above, the second biggest predictor of team creativity was “external communication”, which describes the extent to which team members communicate with those outside of their own team. To learn more about why strong personal networks play a pivotal role in innovation, check out our coverage of some fascinating research by the Connected Commons.

The big idea here is this – the more team members communicate with those outside of their immediate team circle, the more likely they’ll gain new knowledge and share different perspectives, which can spark the process of developing a new idea or strategy.

In order for team members to have a chance to communicate with those who are in the same company but in different teams, they need to have pre-existing relationships with those people. It’s why companies invest in our team building programs during their whole-company offsites, and why your own team building activity for creativity needs to emphasize relationship building between those who are within, and outside, of the team you’re in charge of. The broader and thicker the social network in your company, the more likely creative ideas will emerge from chance encounters and conversations.

3. Your event should give your team a chance to practice knowledge sharing.

Another major element that emerged as a predictor of team creativity in the analysis we cited above is “internal communication”, which describes the extent to which team members are able to share knowledge, experiences, and ideas with members of their own team.

A more recent study by a group of researchers in China found that human resource practices that encourage cooperation and create a secure and trusting climate (e.g., group-based payment) encourage knowledge sharing, and this, in turn, enhances team creativity. When there is a lack of knowledge sharing in the team, the researchers suggest that they end up wasting time on redundant learning and inefficient problem-solving. The take-home idea is this –knowledge sharing is fundamental to creativity.

Another study conducted in 2016 analyzed the social network within a group of 22 engineering teams and found that highly creative teams have dense social networks and shared (rather than centralized) leadership among team members. Within these teams, members frequently interact with one another and the flow of information is accelerated. The point? Well-connected teams that share leadership are creative teams.

In the context of what you can practically do during your team building activity given this information, we think that activities that give your team a chance to intentionally practice knowledge sharing would be a great start. For example, in our Building Bridges program, we intentionally put some barriers between participants that make it challenging for them to communicate, with the ultimate objective of starting a conversation about how they can improve their ability to communicate within their team despite challenges and barriers. If you’d like to specifically hone in on the skill of communication, check out our Effective Communication training workshop.

Regardless of what activity you decide to run that targets knowledge sharing, just remember this: knowledge sharing and communication are skills that need practice. The better your team gets at it, the more likely they’ll be able to leverage their creative potential.

4. Your event should give leaders a chance to work on the same level as team members.

On top of illustrating the impact that dense networks within teams have on team creativity, the 2016 study of engineering teams that I cited above also tells us that the more leadership is shared rather than centralized, the more likely the team is to be creative.

A more recent study of 67 teams from a large commercial bank confirms those findings and tells us a little bit more about why shared leadership is so important for creativity. The researchers found that leadership that empowers team members enhances the team’s potential for creativity for two main reasons: (1) it encourages team members to be more open to learning, which in turn improves their motivation and access to knowledge, and (2) it gives team member a sense of competence, which then allows them to confidently generate creative ideas that can be useful to the organization.

Bottom line – teams where members feel empowered and leadership is shared are more likely to be creative. When planning your team building exercise, it would be impactful to have leaders participate and work on the same level as team members. First, this allows leaders to build interpersonal relationships with their team members, and second, this sends the message that the norm in the team is shared and empowering leadership. Ultimately, this will allow you to create a team climate that is ripe for creativity.

At the end of the day, the most important idea for you to take from this post is the fact that a team’s culture is fundamental to its ability to be creative. To build a culture within which creativity can emerge, consider putting your team through shared experiences that (1) allows you to clarify your team mission, (2) build relationships, (3) gives your team a chance to practice the skill of knowledge sharing, and (4) gives your team’s leaders a chance to work on the same level as team members.

Give these ideas a shot, and let us know what you think through the Contact Us button above.

Also, check out our Training Workshops, which are uniquely designed to develop specific soft skills, such as creativity and communication, for both teams and leaders. Specifically, if your team is need of some help with creating a culture that is conducive to creativity, consider our Organizational Culture Development training workshop.